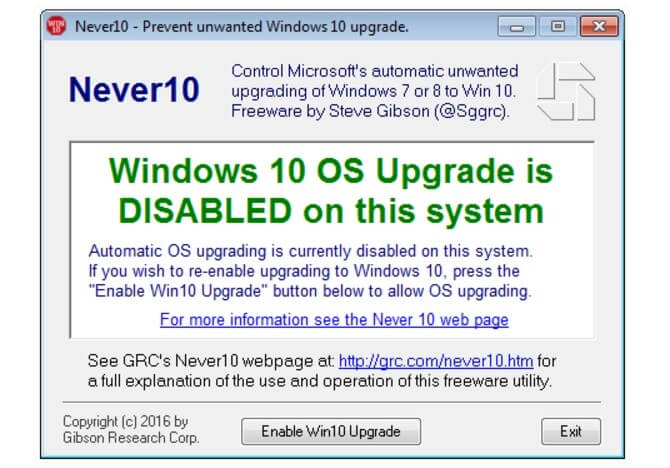 Never 10 is an easy to use utility which gives users control over whether their Windows 7 or 8.1 will upgrade itself to Windows 10. The name “Never 10” is a bit of an overstatement, since this utility may also be used to easily re-enable Windows operating system automatic upgrading. But the primary reason for using this is to disable Windows’ pestering insistence upon upgrading Windows 7 or 8.1 to Windows 10.

Many users of Windows 7 and 8.1 are happy with their current version of Windows, and have no wish to upgrade to Windows 10. There are many reasons for this, but among them is the fact that Windows 10 has become controversial due to Microsoft’s evolution of their Windows operating system platform into a service which, among other things, aggressively monitors and reports on its users activities.

This alone makes many users uncomfortable enough to cause them to choose to wait. In line with this, a few months into 2016, Windows 10 started displaying unsolicited advertisements on its users’ desktops. Others dislike the changes Microsoft made by merging their failed “tiled” smartphone user-interface into the Windows UI. And, finally, some object to being force-fed whatever Microsoft wants and simply wish to choose for themselves.

In July of 2015, responding to the significant user backlash, Microsoft added features to its Windows Update facility which allow it to be configured, on a machine-by-machine basis, to not forcibly upgrade qualifying Windows 7 and 8.1 operating systems to Windows 10.

However, Microsoft did not make this configuration simple. It requires the use of the group policy editor (which is not present in some qualifying systems) and/or the system registry. In other words, they created some deep internal configuration options but chose not to provide a simple user-interface to give their users the choice. “Never10” provides that choice.