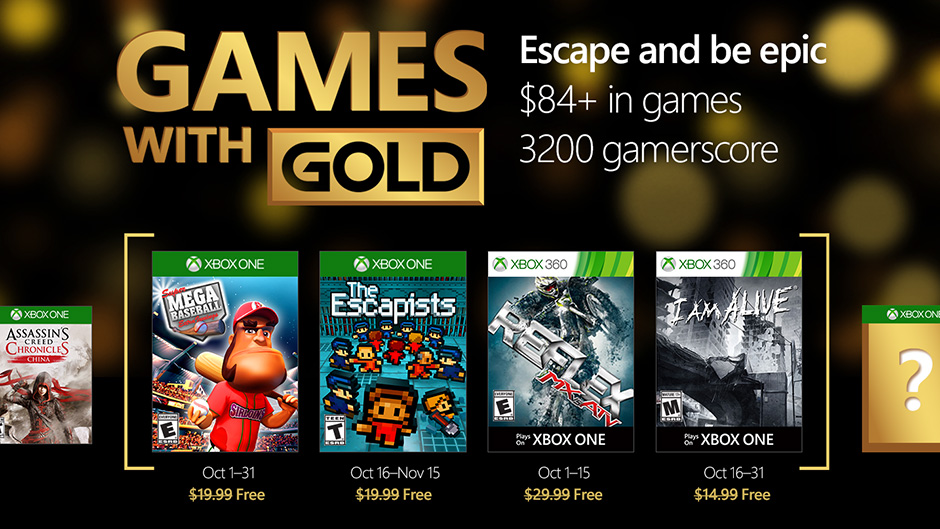 Games with Gold has four new titles for you to add to your game library for October. As with last month, Xbox One will get two dedicated titles, and two Xbox 360 titles, as well, through Xbox One Backward Compatibility, for a total of four completely free titles thanks to Games with Gold.

For Xbox One, October brings two exciting ID@Xbox titles to Games with Gold with the hit (literally) title Super Mega Baseball: Extra Innings and the insanely popular release from Team17, The Escapists. On the Xbox 360 (and Xbox One through Backward Compatibility), Xbox Live Gold members start the month with the post-apocalyptic thriller I Am Alive, and then follow that with some hardcore racing in MX vs ATV Reflex.

As usual, all games are available only for a limited time, as part of the ongoing Games with Gold program, so get Xbox Live Gold now to get in on the action!

On October 1, step up to the plate with Super Mega Baseball: Extra Innings. This is a deep, detailed baseball simulation with a lighthearted, friendly look. Blending realistic physics, per-player difficulty control that allows beginners and seasoned vets to play together seamlessly, and tight, responsive controls, this is a baseball game you won’t want to miss!

Then on October 16, there’s only one thing standing between you and your freedom in The Escapists. A clever plan. Get a light-hearted glimpse into prison life with an eye towards escaping once and for all. Mixing simulation, strategy, stealth, and plenty of surprises, you may not want to live in The Escapists’ prisons, but you’ll definitely enjoy the visit.

On Xbox 360 (and Xbox One via backward compatibility), the best-selling off-road racer returns with all new tracks and mechanics in MX vs ATV Reflex. With the revolutionary Rider Reflex control system, you can move your rider and vehicle independently, lean into tighter turns, pull off sudden spins and slides, and smoothly stick landings. Oh and did we mention that the very track itself will deform and change under you as you run each lap?

Then on October 16, you are a lone survivor in I Am Alive. After a worldwide cataclysmic event that wipes out most of the human race, you must explore a desolate city and try to survive long enough to find your family. Uncover secrets, deal with potentially deadly survivors, and intimidate your enemies into submission to conserve ammo… but be careful, some may call your bluff!

As always, Games with Gold is here to give you a mix of brand-new releases, incredible classics, and guaranteed fun. Check out the full details on our Games with Gold program, and make sure you get in on the action while you can!